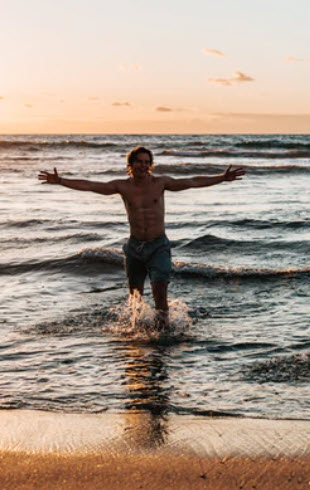 – Hot flashes of any kind are usually associated with middle-aged women. However, a little digging on the internet shows that men’s hot flashes are almost as common as women’s.

What Is This Dark Magic?

Sometimes, this has been referred to as a hot ‘flush’ because the skin turns red during a hot flash. You will probably also have sweating and a sensation of warmth, and sometimes not just warmth but heat. Men’s hot flashes are just like females, with all the heat and discomfort to go along. It is usually most intense in the head and general abdominal area. Sometimes the hot flash is low enough to cause palpitations. The symptoms typically go away after about 4 minutes, sometimes followed by a cold sweat.

Have you been suddenly consumed by heat, dripping with sweat only to be just as quickly frozen to the bone? If you do not have the flu, then hormones could be the culprit.

The Culprit in Men’s

Have you been suddenly consumed by heat, dripping with sweat only to be just as quickly frozen to the bone? If you do not have the flu, then hormones could be the culprit.

Men have a dramatic increase in testosterone in the early teens, and it usually stays level until middle age. Then there is a slight dropping in the ranks for the next decades. But this gradual trickle is not significant. However, after being treated for prostate cancer, some men do have lower testosterone.

Androgen deprivation therapy is the treatment for prostate cancer and can block or greatly diminish testosterone in a man’s body. This will almost always cause men’s hot flashes to occur. Fully 70%-80% of men who suffer prostate cancer will have to deal with low testosterone levels that can be replaced.

The hypothalamus is a gland near the brain, near the pituitary gland. The hypothalamus is like the body’s thermostat and is another culprit in men’s hot flashes. While scientists do not fully understand why lowered testosterone would cause changes in the thermal control center, there seems to be a connection.

Men’s Hot Flashes- How They Impact Your Lifestyle

Hot flashes may be mild and only happen on rare occasions. However, they also can make life miserable when they are intense and frequent. Sometimes they can occur 6-10 times a day. This makes sleeping difficult but can make daytime hours disagreeable as well. Men’s hot flashes can make going to the office or out to dinner uncomfortable.

Men’s flashes usually end 3-4 months after prostate cancer therapy is stopped, but not always. Sometimes they continue for years afterward.

You Can Fight Back

It might seem that the obvious answer to this is to take testosterone replacement therapies.  However, men who have had prostate cancer cannot take it because the prostate cells are stimulated by testosterone.

While testosterone is off the table as an antidote for men’s hot flashes, they can use female hormones as a replacement. Doctors have found that estrogen replacement therapies can help men with low testosterone avoid men’s hot flashes in general.  Studies have been done with Estradiol showing between 80%-90% reduction in the hot flashes. Other medicines include Megace and Provera.

There are side effects to be considered. With Estradiol, about half the men reported breast swelling and tenderness. With Megace and Provera, the side effects could include bloating and weight gain.

Ready for the Ice Pack?

At this point, it’s probably easy to say whether or not what you’re experiencing is a hot flash. But men’s hot flashes need to be diagnosed by a doctor. If you believe you have men’s hot flashes, call the Happy Valley Clinic today at (833) 336-6386.